In 1805, Charles Pelham, Lord Yarborough, fortuitously inherited a whopping estate on the Isle of Wight. From his point of view, its main advantage was as a base from which to go sailing, but the hundreds of acres of land that accompanied the estate still had to be managed.

In 1813, the Hampshire Chronicle reported that gamekeepers’ licences had been applied for by Charles Pelham for both Henry Loe Senior and Henry Loe Junior of Appuldurcombe, to cover his Island holdings at Appuldurcombe, Sandford, Week, North Godshill, Godshill, St Lawrence, Mottcombe, Aps[e], Whitwell, Nettlecombe,Whitcombe and Stenbury. Applications continued for both men until Henry Senior died in 1838, and a further licence application was recorded in the press in 1842. Either or both gamekeepers probably lived in the lodge known as Clevelands, one of four lodges surrounding Appuldurcombe House.

The Loe connection to Appuldurcombe seems to have continued from c 1770 when the first Henry was born until 1871 when Mr Loe gave up the land.  Other family members were later recorded at Shanklin and there was a Ryde link as will appear below.

Being a gamekeeper could be a dangerous business. In 1830, Baron Yarborough offered a 50 guinea reward for the apprehension of two poachers who left his shepherd severely beaten and one of the gamekeepers with a compound fracture of the arm.  They feared for the shepherd’s life. Two suspects were caught but whether any others were found or if the shepherd recovered, we don’t know.

After Henry Senior’s death, his son and possibly a grandson bearing the same name continued in the family tradition of gamekeeping and when not working, they involved themselves successfully in breeding game birds for show.  It seems likely that their employer took at least a passing

interest in their activities as between 1857 and 1869, newspaper reports appeared across the country recording their various successes at Southampton, Chichester, Ipswich, the Midlands, Chelmsford and in South Wales. They specialised in black and brown breasted reds, game bantams, pigeons, silver pencilled Hamburghs, and coloured Dorkings.  Indeed, the family must have been sufficiently known in South Wales for the Cardiff and Merthyr Guardian, Glamorgan, Monmouth and Brecon Gazette to record the marriage of Henry Loe, eldest son of Henry Loe of Appuldurcombe to Miss Mary Ann Potts of Ryde, at Newchurch. (December 16, 1858). 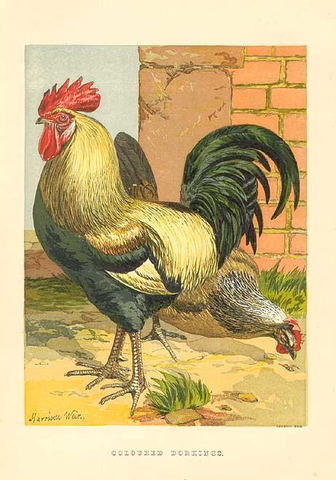 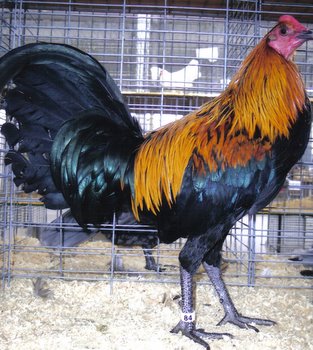 Thanks to the Poultry Society and Mr Harrison Weir.

In 1865, something seems to have gone wrong. The Isle of Wight Observer of May 26 carried the following advertisement. This is to give Notice to all Concerned that a Grey PONY left some12 months ago with the late Mr Loe of Appuldurcombe Park, WILL BE SOLD to defray expenses, if not redeemed within 7 days.

The London Gazette of November that same year then listed amongst its bankrupts, Mr Henry Loe, Appuldurcombe, Pork Butcher. The case was reported again in Perry’s Bankrupt Weekly Gazette of February 10, 1866. Notice of Discharge – Loe Henry, late butcher, now labourer at Appuldurcombe.  Henry Loe, late of 52 High Street Ryde, pork butcher, afterwards of Appulducombe, labourer, but lately Prisoner for Debt in the County Gaol of Winchester, adjudicated bankrupt on the 15 November 1865, proceeding passed to the County Court of Hampshire held at Newport and Ryde, Order of Discharge granted by Hampshire County Court, June 30 1966. Was this Henry Junior, or perhaps his son?

In 1869 it was Henry Loe taking somebody to court. The Hants Advertiser of May 12 described how Alfred Read, aged 9 had been accused of stealing watercress value one shilling from Mr Loe of Appuldurcombe. He was apprehended on the road to Godshill where he told Policeman Jennings that Mr Loe has given it to him. Mr Loe said that he wanted an example to be made as his fences were always being broken down. Alfred was ordered to pay 7/6d costs with 1/6d fine, to be paid in seven days.  Bad luck, Alfred.

The Loe link with Appuldurcombe came to an end in 1871 when the Hants Advertiser, September 23rd  advertised as offered for sale at Appuldurcombe Dairy Farm, 30 head of well bred Dairy Beasts, 2 useful Cart Horses, a handsome Hackney, implements, Dairy and Brewing Utensils, the property of Mr Loe who is giving up the land.

6 thoughts on “Mr Loe of Appuldurcombe”