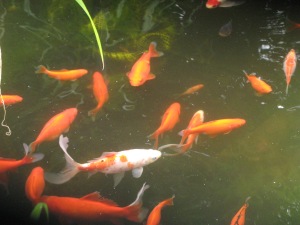 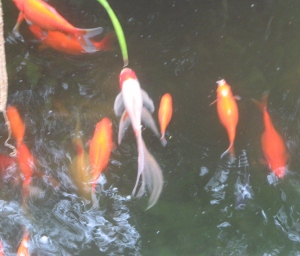 Last year a not so ill wind toppled a cherry tree into the neglected garden pond.  At the time no right minded fish or tadpole would be seen dead living there but being obliged to remove the fallen branches, it got a make-over. Filled with water from the well and some weed filched from the neighbour. thoughts strayed to creatures of the deep.. A few days later along came Bake and Bean, two koi carp who had outgrown their aquarium and were ready to try something larger. Big pond, still room for more..

Bake was a rainbow of orange, black and white splodges while Bean, sporting a feathery boa, was an elegant white with a cardinal’s cap. Perhaps some things are meant to be for very soon the pet shop window carried an advert announcing: Clearing Pond. Wanted, Good Home. We rang the number, visited and returned with an ocean of assorted aquatic wildlife.

Goldfish, it seems, have a lot to teach us. Invaded by an army of immigrants, Bake and Bean calmly made them welcome and from tiddlers to fully grown aldermen, they settled down together. We tried to count them but fish are not sloths and the nearest estimation was agreed at about fifty. As with people, some were more noticeable than others and acquired names. Sticking with the culinary and colour themes, Kipper, Tomato, Peaches, Scarlet, Ruby and Magenta were added to Bake and Bean. A trio of small, black fish were baptised Leroy, Denzil and Forrest.

It didn’t take the community long to realise that the moment the pump was turned off, manna mysteriously appeared from above.  A satisfying slapping noise echoed around the surface as hungry fish snapped up the pond pellets and flakes.  Another new routine was added to the day because a willow tree hanging nearby took pleasure in depositing its leaves at the first opportunity.  Bake, Bean and the gang soon got used to my hand scooping up the greenery. At the sound of a voice (I invariably greet them with “Good morning my treasures,” or something equally insane), they came to investigate. Fishing out detritus with a net roused little interest and one had to be careful not to catch them.

A year has passed, there have been a few scares, one or two fatalities. The sight of a corpse glistening on the surface clouds the day but happily it is a rarity.

Recently the fish began to do what fish do – became broody or randy according to their nature and somewhere in the shadows a plethora of eggs were deposited. This created two contradictory thoughts – how exciting to hatch baby fish and OMG what will we do if thousands hatch out?  Having discovered that a hatchling is about the size of a mite, curiosity got the better of me and I transferred some water into a small tank with some weed on which there might have been eggs.  It took about a week to discover that those transparent microscopic dashes across the water were in fact baby fish. As with all new parents I now have the responsibility of raising them, seeing that they are properly fed, put them down for good schools, make sure they have extracurricular activities. Having read the aquatic version of Dr Spock I now worry about water quality, maintaining an even temperature, overfeeding them, starving them.  As far as I can see, there are only three ‘fry’ so Dogger, Fisher and German Bight have joined the community. Should more appear from under the water weed then there is plenty of scope for Ronaldsway, Shannon, Dover et al to be added to the roll call.