In July 1739 Lady Anna Dixie gave birth to her third child.  Any joy at the arrival of baby Anne however would soon be extinguished when her mother died following the delivery.

Her father, Sir Wolstan Dixie, 4th Baronet, was unlikely to have much sympathy for his motherless daughter. In his native Leicestershire he was known as an autocratic bully, irrational and, according to Samuel Johnson who had the misfortune of being briefly in his service, he had suffered intolerable harshness at his hands. 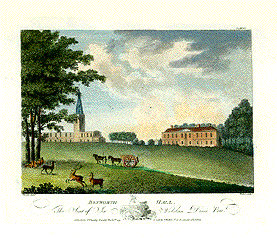 Over his estates, Sir Wolstan Dixie had absolute power.  He was the Sheriff of Leicestershire and owned a vast property at Market Bosworth in that county. By “divine right” he served as chief trustee of the local Dixie grammar school founded by a distant namesake who at the time (1601) was the Mayor of London. Sir Wolstan frequently rode roughshod over the rules set up for the governance of the school.  Quarrelsome, he was regularly in dispute with his neighbours, not least over the right of local waggoners to take their carts across his land. Having assaulted a servant of Wrighton Mundy, owner  of nearby Osbalton Hall, Mundy dressed in his servant’s clothes and took his wagon across the land. When Sir Wolfstan threatened him with violence the pair resorted to a fight in which Wolstan was trounced.  In a rare audience with King George II the king remarked on the famous battle at Bosworth, where King Richard III met his end.  So ignorant of history and self obsessed was the baronet that he failed to realise that the king was not talking about his neighbourly disputes and promptly explained how he had bested Wrighton Mundy. The Geman speaking king may well have been confused by the response.

Wolstan was equally quarrelsome with his servants. The Derby Mercury of January 8 1535 reported that Elizabeth Barker, a servant in his employ had brought a case against him for £1,000 for wrongful arrest over a stolen item. The dispute dragged on until Elizabeth was awarded five shillings damages. The Mercury observed that “Notwithstanding this ill luck on the side of the Baronet, he has three other Servants in Leiceser Gaol on a Charge of Felony,”

Wolstan was thirty-five when he married.  His bride, Anna had been born in Barbados, the daughter and heiress of Tobias Frere, a governor of that island.  Like the Dixies, the Frere family had become wealthy as merchants. At the age of 18, Tobias’s father (also Tobias) had left for the Americas. He and six others later petitioned the Lords of Trade for permission to trade arms to Barbados and were permitted to take them from the Tower of London. In addition to their estates in St George’s Parish, Barbados, the family had extensive lands in Suriname and in York County Virginia. Young Tobias, Anna’s father, inherited half of Tobias senior’s estate, including 81 slaves.

At the time of the marriage,Anna was living in Great Russell St in Bloomsbury, London. The Derby Mercury of May 15 1735  reported that she was “a very beautiful young Lady, endow’d with all the finest Accomplishments, that can any ways contribute to adorn her Sex, and at £20,000 her fortune and upwards besides her great Expectations.” In the next four years she had three children, a daughter Rebecca, a son named Wolstan and the baby Anne who she was never to know.

Very little is known about young Anne’s life but at the age of two, her father re-married and went on to have seven more children in ten years. The new Lady Theodisia Dixie must have been fully occupied with her growing brood without too much time to devote to Anne. While her position in the family was uncertain, her brother Wolstan as heir to the estate, was assured of his.

When Ann was twelve, tragedy struck and Theodosia too died. Sir Wolstan took a third wife, Margaret Cross who, faced with a tribe of step children, did not add to their number. Anne would now have been on a more equal footing with her step siblings as they had all lost their mother but she still bore the burden of having stolen her own mother’s life.

As she reached her late teens, the question of a suitable marriage must have arisen.  Sir Wolstan was in a position to give her a generous dowry but a rumour reached him that Anne had plans of her own. She was suspected of secretly meeting a young local man, their assignation taking place in Bosworth Park. A reasonable father might have talked to her. A reasonable father would have taken the trouble to find out about the young man, but Sir Wolstan was anything but reasonable. He ordered that a man trap should be set on the route to where the lovers met. Hearing of this, Anne set out secretly to warn her sweetheart but tragically she became a victim of her father’s barbarous trap. She was rescued and carried back to Bosworth Hall but nothing could be done to stop the bleeding and at at age of nineteen, Anne died.