The last time I went to a football match was in 1974. I took my son, a nine year-old Portsmouth fan, to Fratton Park to watch his favourite team and since then, the shenanigans in the soccer world have passed me by. It seems all the more bizarre therefore, that forty-two years later I find myself dipping my toe into that ocean of sado-masochism known as being a football fan.

It is a novel experience, looking on-line each week to monitor my team’s progress, learning to talk about how “we” rather than how “they” got on in their latest match. This is what proper fans do, buy the shirt, shout the slogan, assume they are an essential part of the squad and suffer the agony and the ecstasy of the latest encounter. Unfortunately, since I threw my weight behind my team, they haven’t won another match – and they were doing so well.

So who are these gladiators who have me metaphorically screaming from the sidelines? Not Bristol Rovers, not Blackburn Rovers, but Forest Green – the very name conjures up a rural idyll. They are hardly local. For that I would need to return to Portsmouth, or perhaps Southampton, or even Bournemouth. Forest Green are born and bred in the Gloucestershire village of Nailsworth, close to Stroud and have been strutting their stuff for 127 years with changing fortunes.

Since 2010, something has happened. A whirlwind with a mission and money in his pocket came along and transformed them into something that past fans would not recognise. Present fans are still scratching their heads and wondering what the hell happened, still adjusting to the fact they have become the only VEGAN football club in the country.

There is much more. Forest Green are green, so green that solar panels on the stadium roof power the robot lawnmower that cuts the 100% organic pitch. So green that rain is stored beneath the turf and then recycled to keep the grass – green.

So who is this Svengali who has transformed a struggling collection of players into a team that everyone is talking about? His name is Dale Vince and I imagine him as a sort of love child of Caroline Lucas and Jeremy Corbyn, with a good dose of Sir Alan Sugar thrown in. 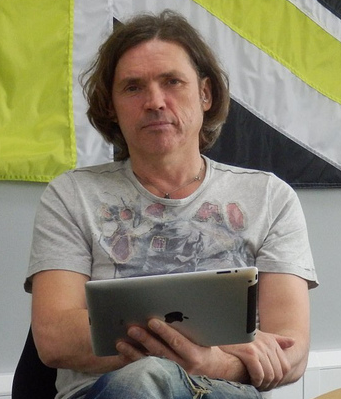 Dale Vince is one of those phenomena with drive and a steamroller of a personality that manages to change the unchangeable. Ever the rebel, as a youth he took to the roads, a New Age traveller in an ageing van that was even then powered by a wind turbine. His CV will report him protesting at Molesworth peace camp, rallying the troops at Stonehenge, with fire in his belly and the Garden of Eden in his soul.

So, when it all began at Forest Green Rovers, did the club supporters listen to his plans for making their team ethical and sustainable? They did not. They saw an outsider, a bloke who had made a load of money and wanted to overturn everything that was traditional and comfortingly familiar. They were there for the beer the burgers and the footie.

But Dale Vince is made of stern stuff. Inspired by the possibilities of wind and solar power he turned entrepreneur and set up his own company, Ecotricity. It is doing awfully well, so well in fact that you would need to win those Euro millions several times over to compete in the wealth stakes.

Wind and football are only a part of the story. Dale Vince is all about power, not just turning on the lights, but turning the wheels of industry. Then there is transport. To prove a point, he built an electric car that is faster than a Ferrari. He called it Nemesis, the Greek goddess of vengeance. His first eleven football team each has an electric car, stylish, sporty and advertising loud and clear that green is good – well, not loud actually because I believe that electric cars are soothingly quiet.

Inevitably this radical stand causes controversy. From the mild taunting in the stands of “what about the sausage rolls?” to the glee with which the press report how Forest Green players sneak into a baker’s shop to buy pepperoni pizza, the public is always on the lookout for something with which to taunt them. In fact, not every player is vegan, or even vegetarian. Change comes slowly and as long as the players obey the rules at work, then what they do in their spare time is up to them. With regards to diet however, as the BBC so succinctly put it, dietary habits are known to be a factor in recruitment.

The official site carries lots of information about the club and the players. If I am reading the statistics correctly, many are new recruits having been at FGR for less than two years. The majority appears to be British born and bred – no expensive signings from half away round the world. Behaviour on the field looks admirable with very few yellow cards and even fewer red ones.

Listening to the fans, it is clear that this ethos is slowly getting through. Many are beginning to acknowledge that recyclable, unpolluted power must be better for the planet. Grudgingly they recognise that if it takes ten tons of vegetable protein to produce one ton of beef, then veganism just might make sense.

Meanwhile Forest Green Rovers have had a pretty stunning season. At the point at which I signed up as a “fan,” they had won nine games in a row. Despite the kybosch I put on them, they still ended the season in second place and were also league finalists, unhappily losing to Grimsby.

I can’t wait for next year. I doubt if I will ever make it to Nailsworth, but as the players run onto the pitch in their ethically sourced, snazzy green and black strip, I imagine waving my walking stick and screaming Up the Rovers!

5 thoughts on “Up the Rovers!”