It should come as no surprise that as I had barely been off the Isle of Wight, I had never crossed the English Channel, but as the Sixties dawned, armed with a very large trunk, and a passport, I took the boat train from Victoria Station. New experiences flooded me, a nighttime sleeper, dinner with strangers and wine, an unknown destination and the hubbub of French voices.  I think the train terminated at Lausanne and from there I caught another one to my destination – Geneva.

I was met at the station and taken to stay at the Hotel Terminus. Living in a hotel was also something new, as was being collected by a chauffeur and delivered to a charming Swiss villa where the British Delegation had their headquarters.  On the way, we passed the United Nations building, pointed out by the Italian driver who conversed in  French. For some reason all of the chauffeurs were Italian. 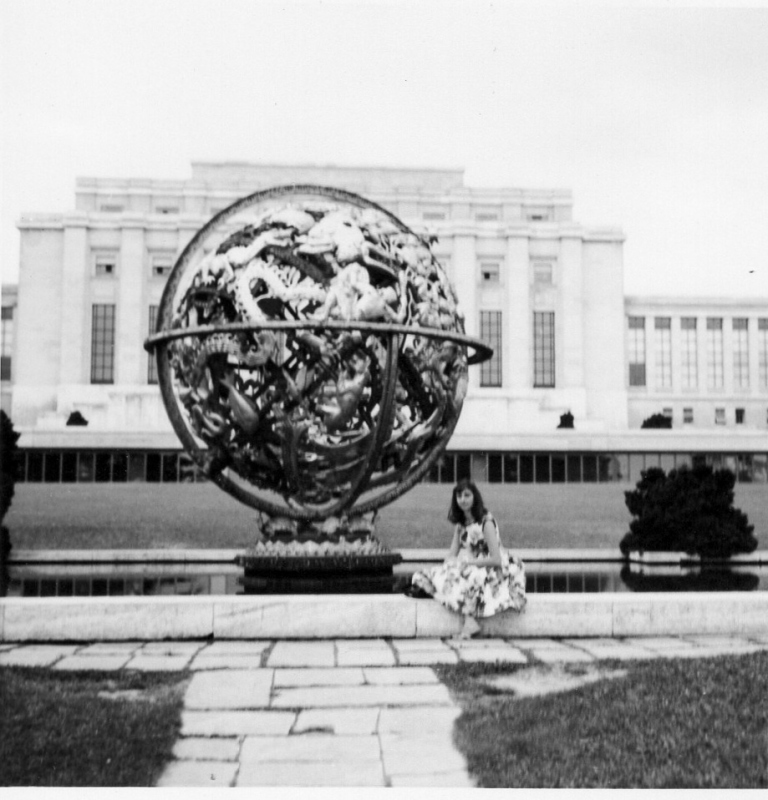 Geneva is and was the European centre for the United Nations. It is small, picturesque and affluent. It is also full of ‘foreigners.’ The Swiss, who like to be in bed by 10.0’clock, are compensated for all the inconvenience by a huge influx of money, but on the downside, the cost of living and property were both high, something that did not affect me as apart from receiving a salary, I also had a foreign allowance that was generous enough to live on without touching my wages – take note taxpayers!

Now, the point of all this expense was to secure Britain’s entry into the European Free Trade Association.  My job was much as it had been before, sorting out the mountain of paperwork generated by the team. My colleagues were diverse, from an Ambassador involved in the talks, a Head of Delegation running things locally, some people from the Treasury and an assortment of humble beings, not unlike myself.  Before long a flat was procured for me and I moved into the Avenue Wendt, just about near enough to walk to work.

By the time I was beginning to get used to this new life, something changed. I think the Free Trade people must have given up and gone home because I was transferred to the Nuclear Rearmament Negotiations – same flat, same office building, but the atmosphere was altogether more John le Carre. Those involved were the Americans, the French, we Brits – and the Russians.

Looming nuclear disaster was in the air, unspoken, but like mist, damp and cold and insinuating its way into the public consciousness.  Security was notched up.  We had, of course, signed the Official Secrets Act on joining but now quiet briefings warned us to be on the lookout for anything suspicious, report immediately if we thought we were being watched,  and above all, to be careful what we said. The message was to lead a blameless life and be on the lookout for reds under the bed.  My divan could never have accommodated even the smalled Communist underneath, but a few other waifs and strays sometimes found themselves sleeping on the floor. 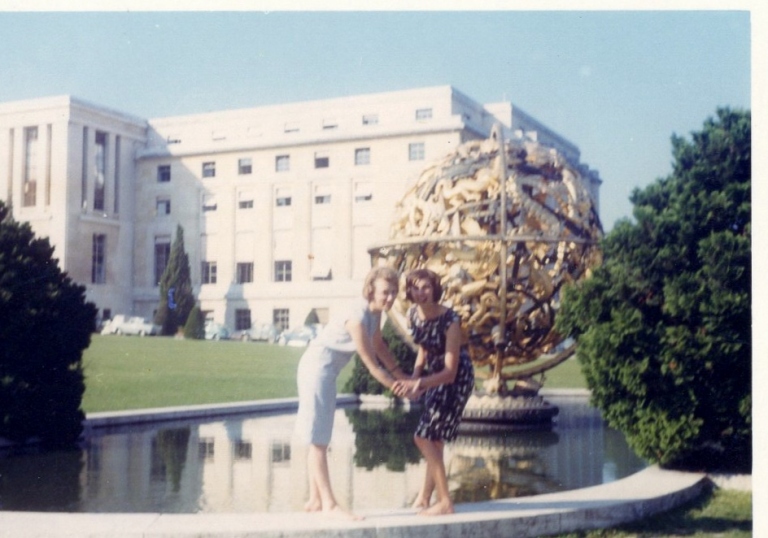 I now underwent a new training as cypher officer.  I wasn’t exactly Mrs Turing. I didn’t carry a copy of War and Peace and send cryptic messages indicating a page and line number. Reels of tape with patterns of holes ran through a machine and at the other end it was transferred back into normal script. Much of it  was lost on me.  Most of the time the documents were  marked Confidential, occasionally Secret and very rarely, Top Secret.  I suppose I might have smuggled it out and passed it on, but to whom?

I didn’t have a licence to kill, but eavesdropping wouldn’t have been frowned upon. My Mum would have frowned, though, as she always said that eavesdroppers only heard bad about themselves.

So, I bought a black leather coat, black boots and went off to meet the Russians.  Sometimes they would throw a cocktail party and we girls were included to add a dash of – glamour?  The Russians were charming, taught us how to say Dobre Dan and Dostvedanya.  Served caviar and vodka.  Nobody suggested that we might stay on when the rest of the delegation left.

Once I went there on my own to deliver a package. In a chauffeur driven car I was escorted to the electronic gates were we made the purpose of our visit known, were admitted and drove towards the Russian villa, not so different from our own. I was acutely aware that we were being watched – of course we were. With a business-like march, I made my entrance, handed over the package and left. Mission accomplished.

At one of the cocktail parties I met a man who was, I think, Polish. He invited me out, but being a good British servant, I said Niet. The next day, on the tram, I noticed him sitting further down.  A couple of days later he was in the street not far from where I lived. This was it, I was being spied on!  Did I have anything to hide? I don’t know what the others were up to, but I was having a high old time.  With friends, I explored the old town, became a regular at the Cave du Hot Club, smokey, seedy and full of lovely jazz.  I spent my new wealth on designer clothes,ate out all the time and partied. Was I doing anything for which I could be blackmailed?  Well, there were a few things I would rather that my parents didn’t hear about.  I decided that I should report the incident to the security section.  The man in charge listened, nodded, said he know that follower and would have a word with him.  They were probably old friends and had a laugh about it.

So I became more and more at home in this fabulous city. I wanted to stay forever but after nearly four years I had to leave. I was shunted instead off to Brussels, in midwinter, where more negotiations to join the EU were going ahead. It was cold, unfriendly and my colleagues had been working so hard that they barely had time to notice me.  After six months, M. de Gaulle made his famous ‘Non’ statement and off I went again back to London. While I was in Geneva, there were a few highlights.  I rode in Ted Heath’s Rolls Royce, shook the limp wrist of Alec Douglas-Home, got a nod from Dean Rusk and more memorable, went to see/hear Ray Charles and the Modern Jazz Quartet perform.

Still being the Sixties, the Foreign Office had a policy that it employed only single women and as I was in love and hoped to marry the man of my heart, I decided to resign. So, a glittering career in Diplomacy came to an end.  Do I regret it?  Being greedy I would like to have continued to have both, but things don’t quite work out in that way – do they?

In Geneva with the man who became my husband.

Footnote: While I was in Geneva, a new security guard arrived at the Delegation.  He was Australian, a backpacker and awfully young.  He was also refreshing to be with because evenings out didn’t end with a tussle on the doorstep.  It took me a while to discover why.  His purported girlfriend back home was a bloke called Alex and on the occasions when he failed to turn up for some agreed meeting, it was because he had found better things to do, with a Swiss-Italian hairdresser.  I was, of course, indignant at being stood up but he said something to the effect: I might as well tell you, I’m not normal. I thought that he must be a psychopathic murderer and while I was wondering what I should do, he added: I sleep with men.  Was that all?  The fact that he wore subtle eyeliner had the other guards talking and as homosexuality was still illegal, we decided to pretend to be engaged and bought a pair of matching silver bands. Throughout that time he was my best friend and I add this in the hope that he might be out there somewhere…My Life as a Spy