Uffa Fox was a boat designer, growing up on the Isle of Wight on the cusp of the 19th/20th centuries. From his modest upbringing, he became world famous for his maritime design, both in war and peacetime.  A great friend of Princes Phillip and Charles, he is widely remembered more than forty years after his death.

To write about Uffa Fox without mentioning sailing is like describing Florence Nightingale whilst ignoring nursing, but there was more to him than messing about in boats.

Uffa Fox was born in East Cowes in 1898. Named after a Saxon king, his mother was a housekeeper on the Osborne estate and his father Arthur a joiner. They lived in Albany Cottage.

If his name is synonymous with sailing, there is another side to him that is less celebrated and for many his most endearing quality.

Although he had three tempestuous marriages, the love of his life was a classy redhead by the name of Frantic. She stayed with him for twenty-five years. Frantic was a chestnut thoroughbred mare who shared his life at Puckaster Cove and his idea of perfection was riding with her cross-country to Arreton Manor to visit his friend Charlie Yeats.

The ride was never without incident. His route took him from Niton to Whitwell, skirting Nettlecombe, over the Down towards Stenbury, through Godshill Park, across the main road to Moor Farm and Great Budbridge and on to Perreton. Finally reaching Arreton he stopped to admire the old tithe barn now, tragically demolished.

Throughout these marathon outings, it was Frantic who set the pace, galloping when she felt like it, leaping gates if they appealed to her and racing Uffa’s dog Bruce just for the hell of it. On one occasion she had to avoid the advances of a stallion through whose field they crossed.

The stay at Arreton was often lengthy and the journey home frequently started after midnight, negotiating fields and paths with only moonlight for illumination. Alone in the darkness, in his memoirs, Uffa explained how he could feel the warm glow and courage of Frantic coming through the saddle and ‘I could also feel the glow in her heart stealing through, up into my own.’ Along with Bruce, Uffa recalled them as ‘a little band, knitted together by our need for one another.’ 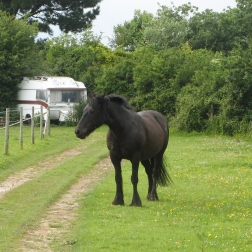 Exploring the Island on horseback is something to treasure.

If Uffa went out without Frantic he visited her on his return. On one occasion she galloped off and he waited up for her, falling asleep in the straw. It then occurred to him that although he had seen her “bedroom” she had not seen his so he rode her up the stairs to look around.

During this time Frantic made the acquaintance of a dog fox that frequented her field. The fox was unafraid and Uffa rejoiced in the fact that the land being inaccessible, ‘this wild, undaunted, beautiful hunter will be on the Undercliff all the time I am on this earth and that, from time to time, I shall enjoy seeing him.’

En route for Newport Market one morning Uffa passed a mare and foal going to be sold. The mare seemed so proud of her offspring that the thought of their separation saddened him so he purchased them both so that they could stay together for life.

Uffa died in 1972 and is buried in the churchyard at St Mildred’s Church at Whippingham.

Celebrated as a naval architect, to do him full justice,  spare a thought for Uffa the animal lover too.