Meeting With a Stranger.

There has been much talk about World War One lately.  The causes and effects have been mulled over, acts of heroism admired, gravestones spruced up, terrible cock-ups resurrected and condemned. Then, just when one is moving on to other things, one of those soldiers  who has long ago faded into the past, suddenly pops up and makes himself known.

It was the mention of horses that did it.  Nobody wants to dwell on the role of horses in war but if somebody mentions an act of courage in rescuing a wounded horse behind enemy lines, then my ears prick up.

(It will not escape your notice that these are German troops but a horse has no such notions about nationality so they represent all of their kind). Photo compliments of Ernest Brooks

The soldier in question was Albert Andrew Ridgers, born in Portslade in Hampshire in 1889.His heroic rescue is kept alive in his family history, along with his medals and a few documents. With this to go on, I set out to piece together what I can of his story.

Albert pops up in the 1901 census, a twelve year old boy, still at school, as is his sister Mabel. His brother James, 14, has already left and is a cellar boy at the local brewery. He is following in the footsteps of their father, William, cellar man, who has died, leaving his 38 year old widow Mary to manage as best she can.  She does so by taking in lodgers at their home at 6, Chapel Lane, Alverstoke. Three boarders live with them at the time of the census.

When he is old enough to leave school, Albert finds himself following the family tradition and enters the brewery. He does not like the job so going into Gosport on March 5 1906, he signs up as a soldier, adding two years to his age. He is in fact, sixteen. Perhaps when working at the brewery he already had an affinity with the dray horses for on enlistment he is transferred to the Cavalry School for Rough Riders, Artillery and Engineers. The course lasted for eight months and he emerged with a certificate stating that he had completed it satisfactorily  but that he had not yet driven on the road. He held the rank of bombardier.

Albert’s army career is recorded in his “Small Book” and it tells us that, his parents having died, his next of kin is his brother James, now serving with the navy. Unhappily, James did not survive the war and by then, it is Albert’s wife Ellen who is his closest relative.

On December 16 1911, Albert married Ellen Sarah Bird, a dressmaker at the Church of St Nicholas at Plumstead. They settled down to married life in Greenwich and there was clearly a strong bond between them rhat lasted 56 years until Ellen died in March 1967.

Three daughters were born to the couple, Winifred, Alfreda Yvonne (mother of the lady who told me about the horses) and Betty, who died when she was five or six from meningitis.

A practical rather than an academic man, Albert passed the army’s General Certificate 2nd Class but the equitation course apart, he underwent no other vocational training.

His involvement with horses continued and in 1923 he was a part of the jumping team, coming third at the Royal Tournament.

On December 5 1935, at the age of 47, Regimental Sergeant Major Albert Ridgers’ military career came to an end having served throughout with the Royal Horse Artilery and the Field Artillery.  His Certificate of Service sums up his army career

He was described as: 5’ 9 ½ inches. Fair complexion, brown eyes, light brown hair. He had a scar ¾ of an inch long by his left eyebrow

An assessment of conduct on retirement described him as Exemplary and his character was summed up as  being conscientious, reliable, tactful, capable. Having worked with civilians, on leaving the force, he was recommended for a job overseeing men. He had good clerical skills, was a fine horseman and riding instructor.

Albert retired with a string of medals to his name. He held the 1914 STAR, BRITISH WAR MEDAL, VICTORY, LONG SERVICE and GOOD CONDUCT MEDALS. He also had the DISTINGUISHED CONDUCT MEDAL and this is where the horse story comes in.

Unfortunately, the details are lacking and it does not tie in exactly with what the family remembers, but on June 21 1916, the The London Gazette, reported that Albert had been awarded the DCM for conspicuous gallantry when the wagon lines were heavily shelled and he showed great coolness and his fine example enabled the horses to be removed to safety. 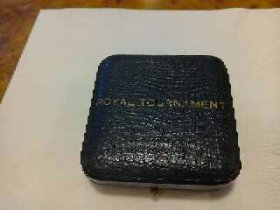 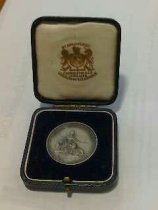 Having left the army, Albert went on to work for the firm of Tate and Lyle that had  a large factory at Greenwich.  Here he became a foreman.  As with the brewery at Alverstoke, working at Tate and Lyle becamse something of a family tradition when Albert was followed into their service by his daughter Alfreda and in turn, by her daughter Gill whose information started this search.

These facts don’t tell us very much about Albert’s life.  Information about where he passed the war years in France has disappeared. How he coped with the experience and how it affected him afterwards is unknown.  He knew loss with his father while he was still a child, with the death of his brother James at sea, with the tragic death of his small daughter and in being left as a widower after a lifetime of marriage.  All those qualities mentioned in his army records show a modest and utterly reliable man who deserves to be remembered.