Mention Number 10 and nobody in Britain will ask ‘which number ten?’  It is universally accepted as meaning the official home of the Prime Minister.

I made the mistake of wondering when it was first called Downing Street. It was named after George Downing, a scoundrel who popped his clogs in 1684. He was both soldier, English ambassador to Holland and double agent. In spite – or perhaps because of his dodgy character, he succeeded in getting a knighthood. It was he who managed to acquire the land that became Downing  Street. According to Samuel Pepys, he was a “perfidious rogue.”

In earlier days the area was known as Thorney Island and housed a Medieval brewery  (the Axe). On two sides it was bordered by the River Tyburn, now buried out of sight but still flowing under Parliament St. The land was leased by Queen Elizabeth to Sir Thomas Knivet who went down in history as having arrested Guy Fawkes. When he died, it passed to his niece Elizabeth Hampden, aunt to Oliver Cromwell. It became known as Hampden House after the family home in Buckinghamshire.

Elizabeth was the bride of William Hampden, bringing to her marriage a jointure of £2,000. When William died in 1597 he left her with two sons and considerable debts.  Her jointure had shrunk to £35.3s.4d

Her boys being under age, the curious, not to say iniquitous custom of wardship then applied. Until they reached their majority, the administration of their lands and income became the property of the monarch, to deal with as he saw fit.  By investing, it could bring in welcome revenue for the king. Alternatively it could be leased out, for a price, to some other individual willing to take on the chance to make a profit. Elizabeth put up a stout fight to retain the wardship.

Elizabeth’s hopes for her eldest son  John’s future suffered a setback when he challenged the king’s right to enforce loans on landowners without consulting Parliament. His main property being situated inland, he also became embroiled when Charles 1st decided to demand Ship Money. Prior to this, it applied only to coastal areas. By 1627, John found himself in the Gatehouse at Westminster, a stone’s throw from his mother’s house.  Things came to a head when Charles decided to break a sacred tradition and entered uninvited into the House of Commons, intent on arresting John and four of his companions. Civil war inevitably followed.

For more than forty years, Elizabeth lived in her Downing Street property that abutted Whitehall Palace and was “near the great tennis court.”  The rural nature of the area is reflected in the description of the garden of Hampden House , 252 feet long and 100 feet wide, being “very pleasant to the eye and profitable for use.” The whole was scattered with gravel paths, shady seats and bowers. From the garden one could stroll to the Peacock Inn or take a passage to Pheasant Court or to the Privy Garden. The building was three stories high, built of brick and timber and the roof was tiled  Inside it had large, well lit, wainscotted rooms, the dining room being upstairs along with six other rooms and closets and four garrets in the roof. 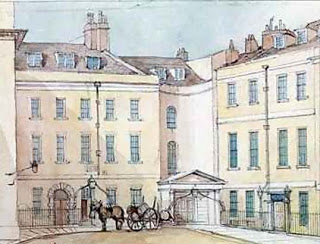 In 1642 King Charles 1st raised his royal standard and declared war on his people. Elizabeth’s family, staunchly Puritan, joined the Parliamentary side. In 1643, her son John, leading his own forces into battle, was fatally wounded.  He left behind nine children. As the Civil War ground to a close, Elizabeth had the satisfaction of living within sight and hearing of the Whitehall Banqueting House where the defeated Charles was deprived of his head.  She departed this life in 1664.

King Charles II reclaimed the house in Downing St for his illegitimate daughter Charlotte, Couuntess of Lichfield. Charlotte, the daughter of Barbara Villiers, was married aged twelve to Sir Edward Lee with whom she had eighteen children.

Curiously, the last named occupant of the house as a private residence was a Mr Chicken about whom very little is known.

In 1732, a grateful King George II presented the house to leading minister Robert Walpole. Walpole did not want it but, unable to refuse a gift from a king, he announced that from henceforth it would become the official residence of the Chief Lord of the Treasury, the title by which he was then known. It was later that the leader of the government became known as Prime Minister. Number Ten still bears the name Chief Lord of the Treasury.